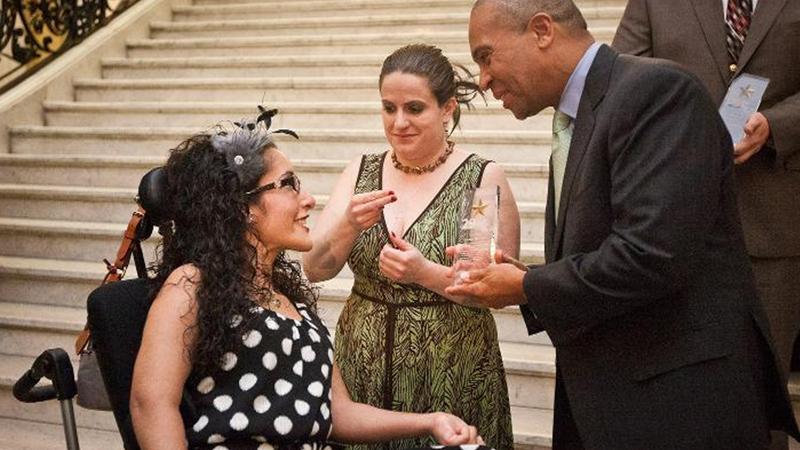 Step back to Spring, 2012, at the Massachusetts State House. A young woman named Caroline Horvitz receives the prestigious “29 Who Shine Award,” a highly coveted honor given to outstanding Massachusetts Community College students. According to the citation honoring the 2012 award winners, “Caroline Horvitz is widely recognized on campus for her wit, intellect, and desire to help others. She served as the student trustee on [the Mount Wachusett Community College’s] Board of Trustees and is a member of both the MWCC’s Honors Program and the Phi Theta Kappa honor society.”

Caroline wasn’t done there. After community college, she earned a BA at Mount Holyoke College and later a double master’s from Simmons College, writing her thesis on Etruscan fibulae Since 2014, she has worked summers at Poggio Civitate in Italy cataloging Etruscan archaeological finds. She is planning to apply for a Ph.D. program.

Early expectations for Caroline were very modest. She was born in 1988 with severe quadriplegic cerebral palsy and profound deafness. Fortunately, her father, Jeffrey Horvitz, accepted the challenges and explored every option available to her, including moving to Massachusetts from Florida in 1992 for better medical and educational care. He hired Cheryl Lauricella, who Jeffrey says became “Annie Sullivan” to Caroline’s “Helen Keller.” Cheryl developed an educational program for Caroline that includes a lexicon of more than 100,000 signs based on Signed Exact English (a transliteration of English) and signs from other languages. Today these signs accommodate Caroline’s graduate-level intellectual abilities. 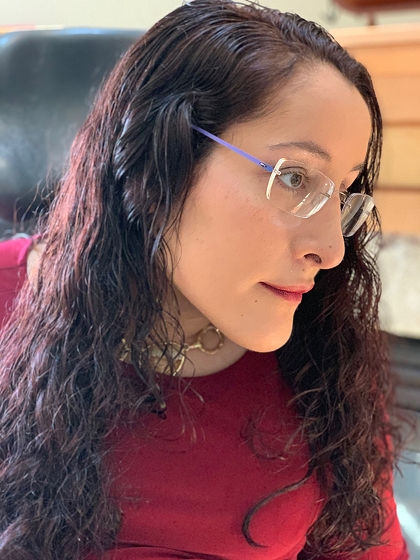 One of Jeffrey’s important discoveries to help Caroline grow was CAST, which at that time was a small educational service clinic on Boston’s North Shore. When Caroline was six, Jeffrey enrolled her in the CAST Pioneer Program, an intensive effort to customize solutions for long-term clients with diverse learning needs. In particular, CAST was exploring how computer technology could support customized, or personalized, learning. They worked with children with physical, sensory, and intellectual challenges in a laboratory environment. The needs of these “pioneer” individual learners guided CAST’s exploration of technology-based solutions.

At that time the Pioneer program had an emphasis on the physical interface for communication, but for Caroline that was far too slow for her expressive and receptive language needs. When public school classes proved to be inadequate, Cheryl became her homeschool teacher and prepared Caroline for college. Meanwhile, the work at CAST—based on the emerging principles of Universal Design for Learning (UDL)—demonstrated that Caroline’s difficulty with subjects such as math said more about the curriculum than it did about Caroline’s abilities. She could learn if given the right structure and support.

Caroline’s experiences at CAST, together with the extraordinary support of her family and tutor, convinced her that she could do anything that others could do, but not necessarily in the same way. After traveling extensively through Europe, South America, and Egypt, Caroline will say, if asked about her limitations, that she has none, “There is nothing I cannot overcome.” she says. “No matter how bad you think it can get, make sure to dedicate your life to helping someone else. There is always somebody out there who is worse off than you.” Bright, accomplished, and fiercely determined she also shows deep compassion for others.

CAST’s ideas and methods have led to unconventional but successful approaches for people like Caroline. This leading-edge thinking, now expressed in the framework of UDL, is perhaps best demonstrated by Caroline herself, who seems to have no significant limitations on what she can achieve, just radically different methods of doing so.

Caroline and Jeffrey Horvitz represent an important part of CAST's history as a non-profit organization, dedicated to busting barriers to learning wherever learning happens. Help us keep developing innovative research and practices so every learner has the opportunity to grow and thrive, just like Caroline.