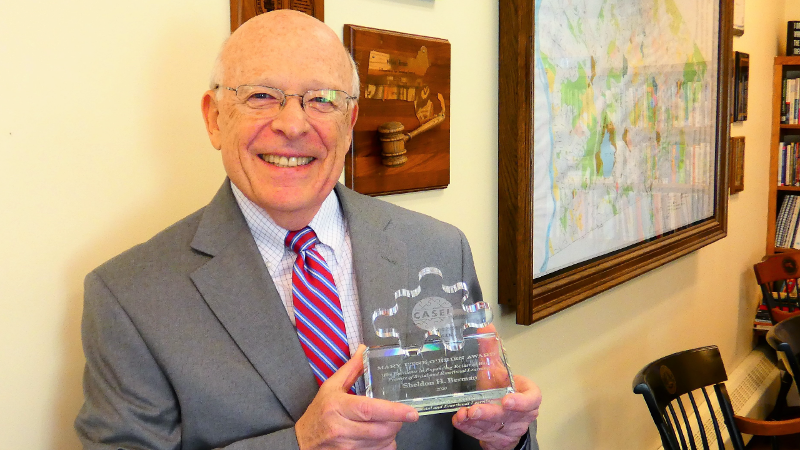 Adapted from a press release via the Andover School Committee.

Dr. Sheldon Berman, superintendent of Andover Public Schools and Chair of the CAST Board of Directors is a recipient of the 2020 Mary Utne O’Brien Award for Excellence in Expanding the Evidence-Based Practice of SEL. The award is presented annually by the Collaborative for Academic, Social, and Emotional Learning (CASEL) to celebrate lifetime achievement in the field of social-emotional learning (SEL), innovation and excellence in SEL, and strong leadership across the growing field of social-emotional learning.

“It is truly an honor to be one of this year’s recipients of the Mary Utne O’Brien Award for Excellence,” notes Dr. Berman. “As an educator for 45 years, I’ve witnessed the growing need for our students to feel known, cared about and valued and for our students to experience a sense of community in their classrooms and schools. Our students’ social and emotional wellbeing is integral to their future success. The collaboration of our educators to create identity safe and culturally responsive classrooms benefits our entire society.”

The award honors leadership related to effective implementation of SEL, presented to district, school or organizational leaders who have provided the vision, inspiration, and practical strategies for developing the infrastructure and support for high-quality SEL at the district or school level. Dr. Berman also received a financial award as a recipient, which he has donated to the Andover Coalition for Education (ACE).

Over a 28-year career as a superintendent, Dr. Berman implemented systemic SEL programs in each of the four districts he has led. He has also provided national leadership in multiple organizations that champion SEL and authored numerous articles and books on SEL topics. He was a member of the Council of Distinguished Educators of the National Commission on Social, Emotional and Academic Development and served as the primary author of the Commission’s report on SEAD practice.

“Dr. Berman knows that students’ social and emotional learning can’t be separated from their academic success,” said Jeffrey C. Riley, Massachusetts commissioner of elementary and secondary education. “I congratulate Dr. Berman on being the recipient of the Utne O’Brien Award for Excellence and appreciate his determination to make instruction engaging and accessible for all students and to ensure that all students are supported.”

“Our students have benefited greatly from the Social Emotional Learning initiatives we have implemented within the district over the past few years,” adds Andover School Committee Chairperson Shannon Scully. “The community values the hard work of Dr. Berman and our educators; fostering our students’ emotional growth sets them on a path for a successful future.”

“It is wonderful to see CASEL recognize Shelley with this award. I am proud to be part of a district under his leadership that recognizes the importance of social-emotional growth,” adds Pamela Lathrop, principal of High Plain Elementary School in Andover. “While Shelley is a superintendent who sets goals for rigorous curriculum, innovation and progress monitoring, he understands the way to achieve those goals is by first laying out a strong foundation in SEL development. Along with our school community, Shelley has created a shared mission to collaborate to create safe, caring and culturally responsive classrooms and schools, and partner with families and the community to support students’ academic growth and their social, physical and emotional wellbeing.”

"During his long tenure as a Superintendent of Schools in Massachusetts, Shelley has been a leader in his inclusion of SEL practices in the school districts in which he has served,” says Tom Scott, executive director of Massachusetts Association of School Superintendents (M.A.S.S.). “Moreover, Shelley has been a significant resource for his colleagues, sharing research and best practices which many of our schools have incorporated into their program. It is hard to imagine another school leader who has done more in supporting the inclusion of SEL into school curriculum than Shelley. He is most deserving of this award."

“Shelley’s contributions to SEL practice span a wide range of activities, from organizational leadership to school district implementation, to the authorship of multiple books and articles,” notes Ms. Cole Duffell. “His 45-year career in education is notable for its continuing commitment to SEL, from his early days as a classroom teacher to his involvement with non-profit organizations through his leadership of four school districts, all ranging widely in terms of size, demographics and unique challenges. Throughout the years, Shelley has remained steadfast in his vision: this work is not just about building better students, but better human beings.”

Dr. Berman officially received his award from CASEL on November 10, 2020. He has also received the 2003 Massachusetts Superintendent of the Year Award, the 2011 Sanford McDonnell Award for Lifetime Achievement in Character Education, and recognition in 2011 by the American Association of School Administrators as one of ten courageous superintendents.

Learn about another extraordinary former CAST board member and her family